After his first contacts and learning about stonework, Juan Carlos started to work in a company in Burgos dedicated to the conservation and restoration of historic and artistic heritage at a national and international scale: the recently disappeared C.P.A.S.L. He was – for over 6 years – the leading stonemason at the workshop, where they carried out several important masonry works using natural stone.

The techniques and tools they used were the traditional ones of the stonemason’s craft: stone was worked on by using hand tracers and artisanal bull point chisel – sharpened with a manual forge onsite – manufacturing bull point chisels with steel retrieved from the automotive sector. The elevation of the materials was carried out using a pulley.

In the year 1996, after having finished the retrieval of three of the four former headquarters of Flanders in Vitoria, he set up, together with two other colleagues of the area, the business Archivolta, to continue carrying out the same activity. Since then, he has worked on countless interventions. Probably, the most significant one over these 20 years of uninterrupted work was the retrieval of the monastic complex (including the church) of San Pelayo, in Cevico Navero (Palencia). This work implied the elaboration of uncountable pieces of stone work using natural stone and carved onsite: groin vaults, lobbed vaults, ribbed vaults, sexpartite vaults, barrel vaults, lunettes, buttresses, pointed arches, round arches, segmental arches, horseshoe arches, three-centred arches, formeret arches, diaphragm arches and toral arches, small columns and pilasters, capitals and bases, shafts, imposts and cornices, rose windows, gargoyles, keystones, jambs, springers, voussoirs, a tiercerons, curbed ribs, chambranles, hood mouldings, coping stones, diamond engraver, archivolts, corbels, steps, parapets, handrails, socles, lintels, curved lintels, gutters and suelos encantados.

Even if his main activity is related to stone, he has also carried out works linked to carpentry. For some of the pieces he has manufactured was necessary to carry out a wooden centering or truss.

Juan Carlos, and his company Archivolta, are dedicated today to the retrieval of all sorts of buildings. They carry different kinds of interventions, the most important ones being wooden horizontal structures, structures in general, and enclosing elements: vaults, domes, arches, oculus, rose windows, walls, pilasters, columns (both using bricks and stone with simple carving or with different moulds) and also finishings with mortars with different compositions.

Juan Carlos started working at a local business dedicated to the construction and repair of dwellings and other architectural elements. After that, he became a student at the municipal School/Workshop in Dueñas in the masonry module. During this training period they retrieved the stone façades of the Convent of San Agustín.

In the spring of 1987 he entered the C.P.A. (Conservation of Artistic Heritage) in Burgos, where he remained until 1996. In the autumn of 1987 and for two years he worked in the Cathedral of León, where he coincided with Mr. Gabriel Conde, from Valladolid, who was in his 60’s, and who is said by many to be the best stonemason in the entire region of Castilla y León, becoming a referent for him.

Any new worker who arrives at the site has to adapt to the group methodology which he is assigned to, whether he is experienced or not. They are trained on the go, and if they have some sort of advantageous method which can be beneficial for the group, it is also taken into consideration.

The most relevant works with the company C.P.A. S.L.:

– Years 1988-1990. Cathedral of León: manufacture of various natural stone pieces and all types of mouldings and their later placement for the entire north tower, Torre Limona, the Cloister and the crowning element of the perimeter of the Sacristy.

– Year 1991. Parish Church of Moarves in Ojeda (Palencia): elaboration of various natural stone pieces for the copings of the bell-gable, the corbels below the horizontal structure and the enclosure of the Atrium.

– Years 1991-1992. Arcades of the Calle Mayor Principal in Palencia: various natural stone pieces and their placement, as well as the retrieval of artificial stone mouldings for a total of 113 columns.

– Year 1993. Façade of the Museo de la Pasión in Valladolid: elaboration of various moulded natural stone pieces for the entire façade and their placement.

– Years 1993-1994. Cathedral of Oviedo: elaboration of various natural stone pieces and their placement, as well as the retrieval of artificial stone mouldings, attaching and sealing of reliefs throughout the entire Portico.

– Year 1994. Palacio del Infantado, in Guadalajara: attaching and sealing of reliefs in all the exterior strips of the courtyard in its two heights, and the building of the Campus of the University in Guadalajara: disassembly of the three bodies of the portal and its re-assembly.

– Year 1995. Parish Church in Presencio (Burgos): new archivolts in natural stone and its placement in the portal.

– Year 1995. Building of the Bank of Spain in Bilbao: cleaning and retrieval of reliefs and other mouldings in the entire coronation of the perimeter of the building using artificial stone.

The most relevant works carried out with the company Archivolta:

Monastic complex of the Church of San Pelayo in Cevico Navero (Palencia). 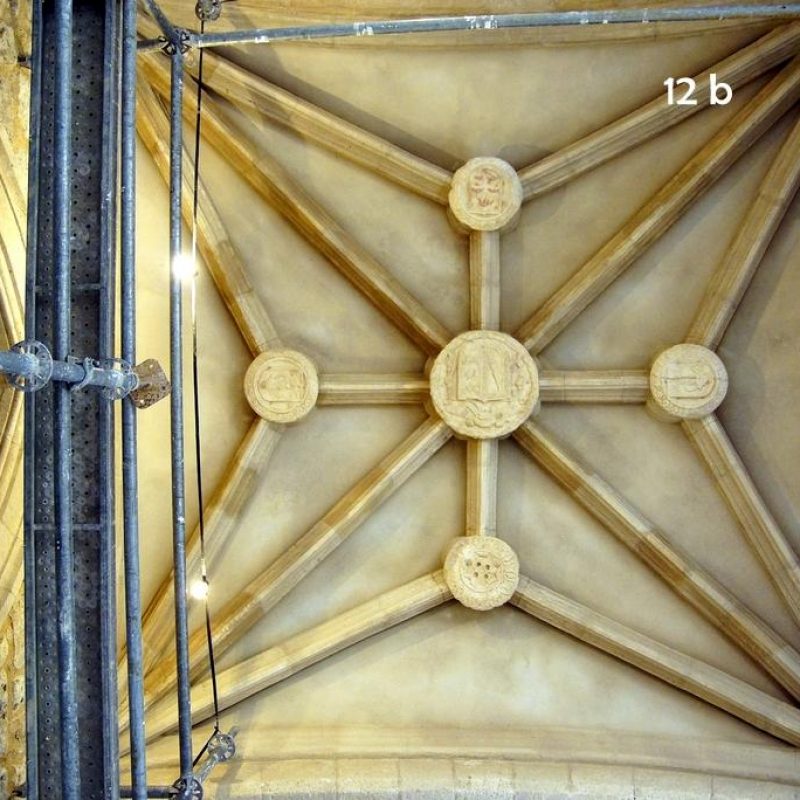 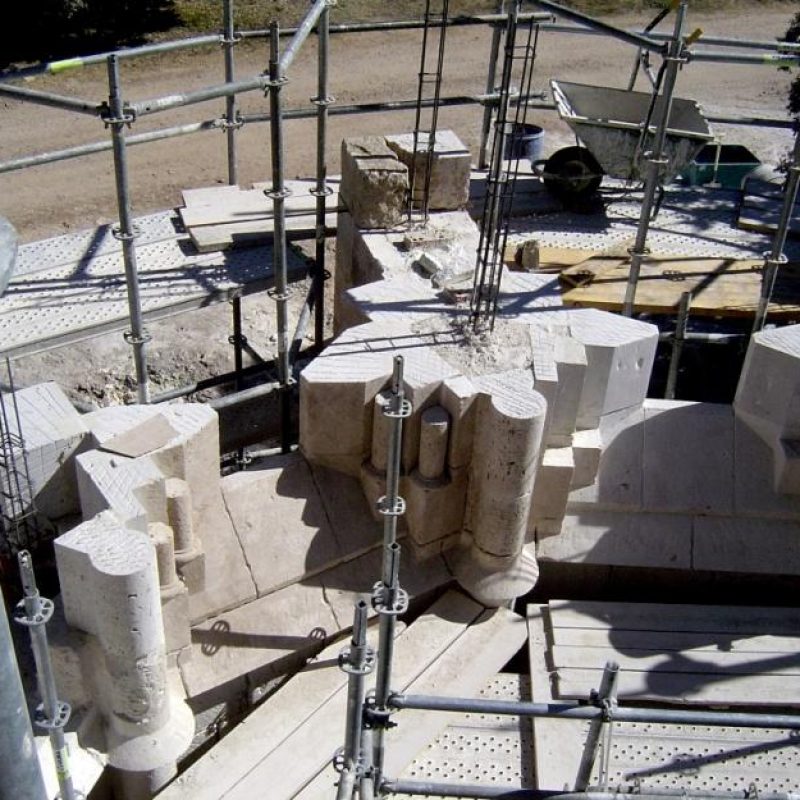 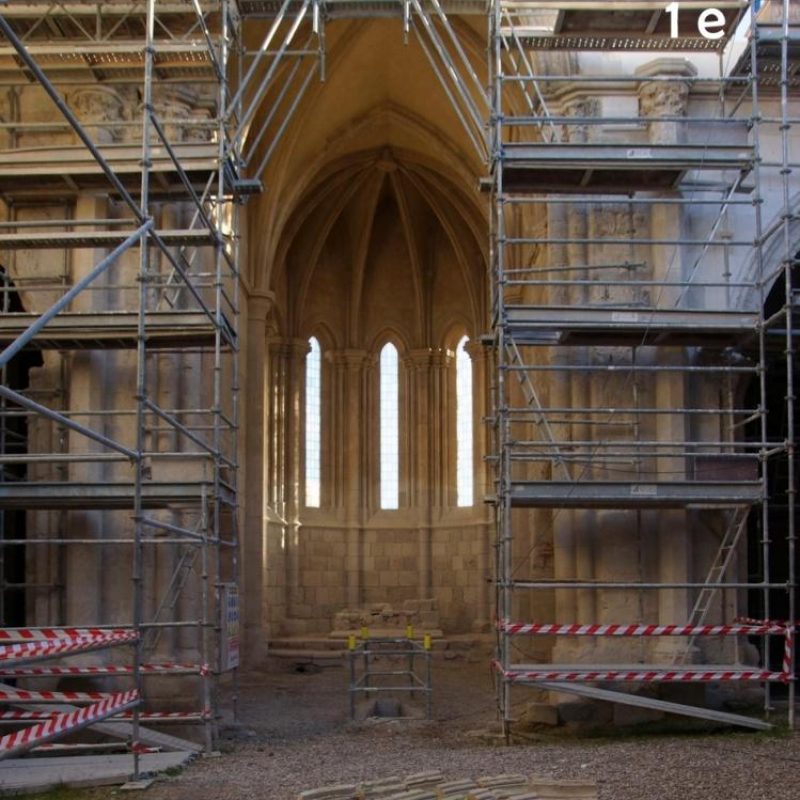 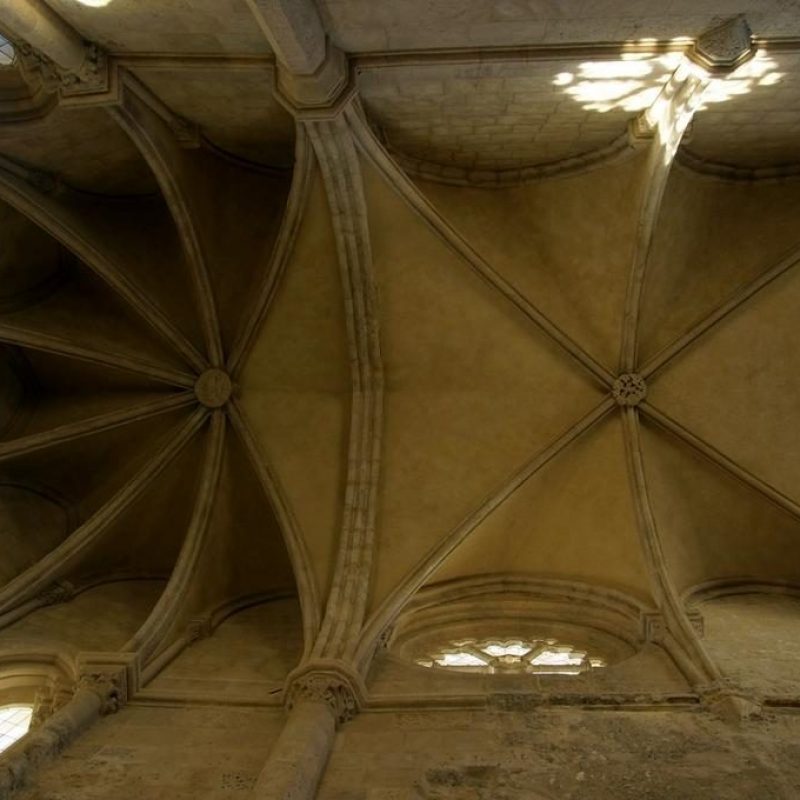 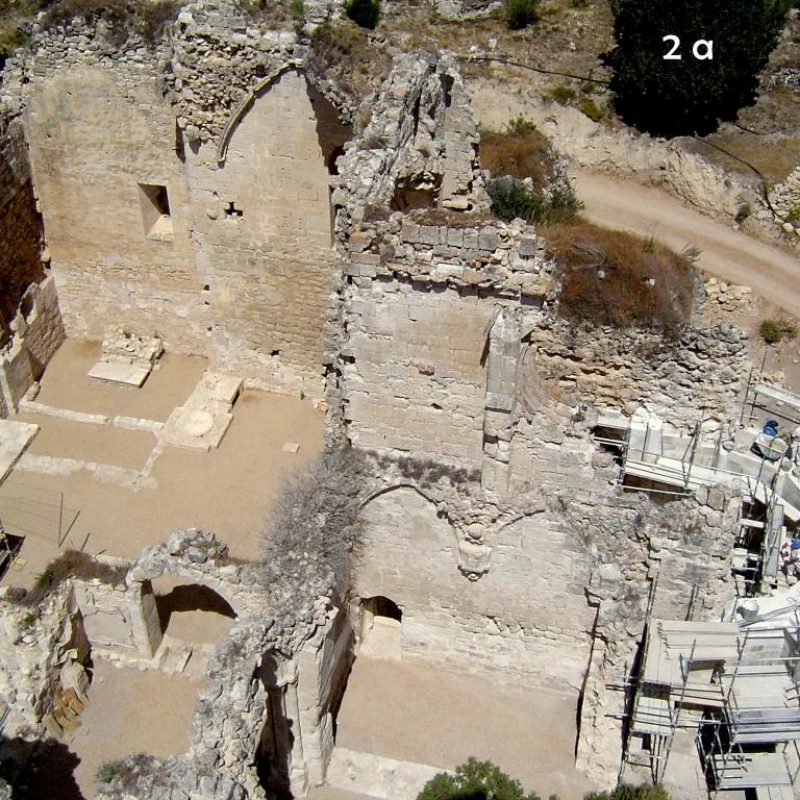 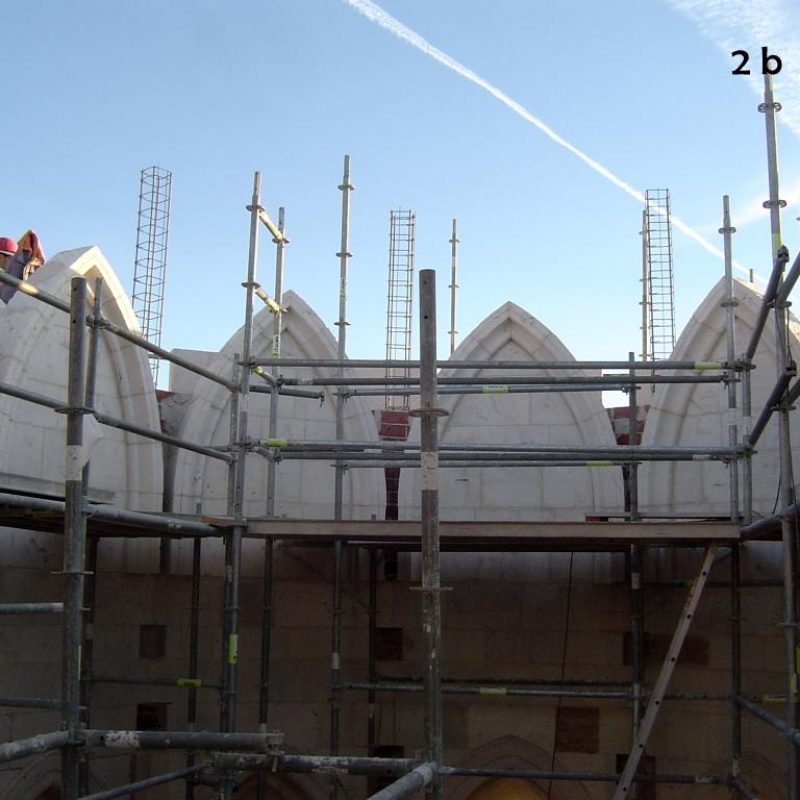 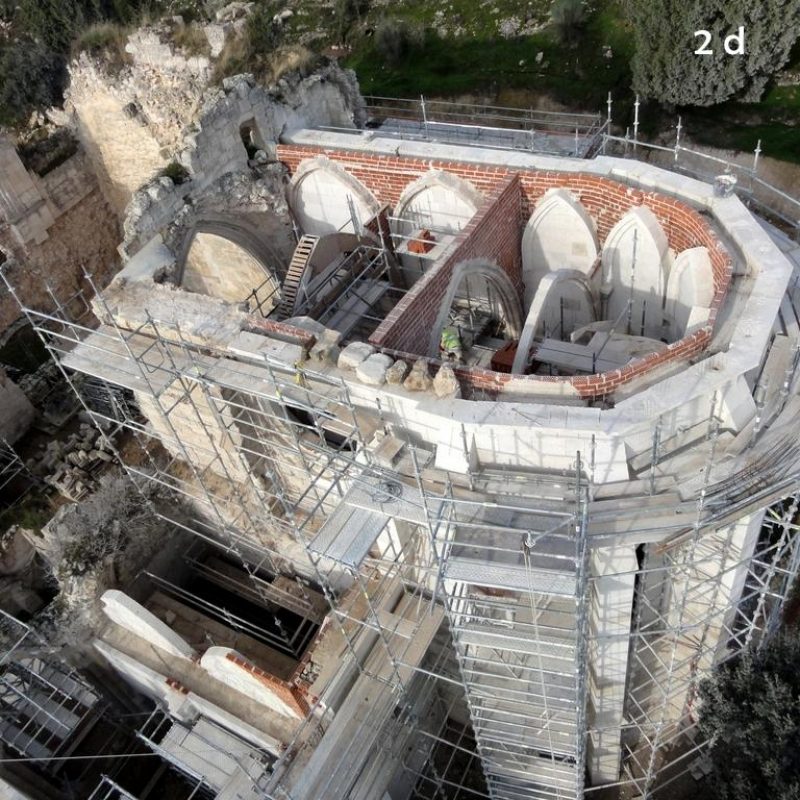 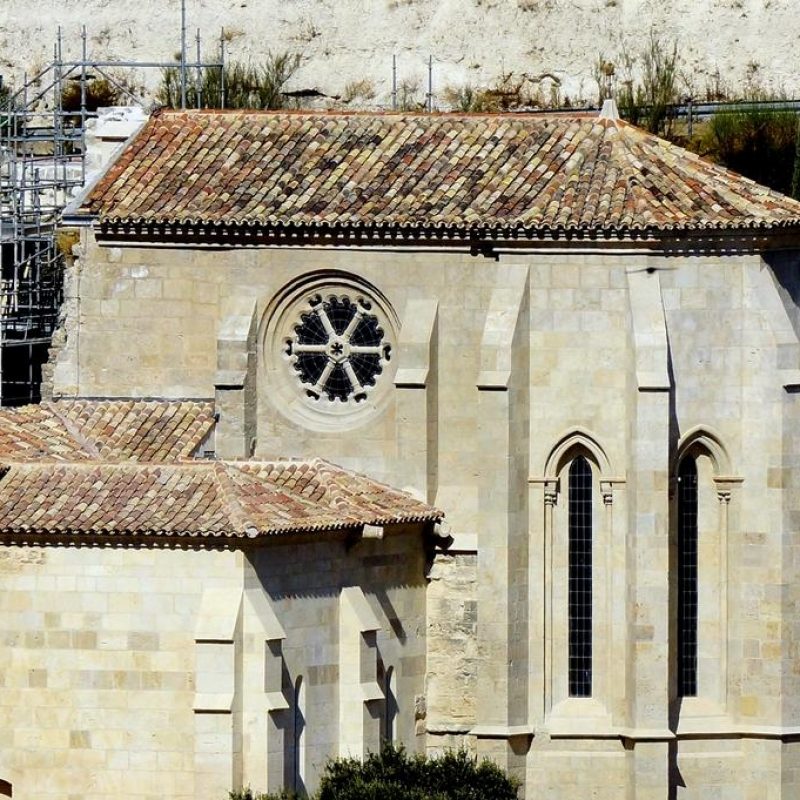 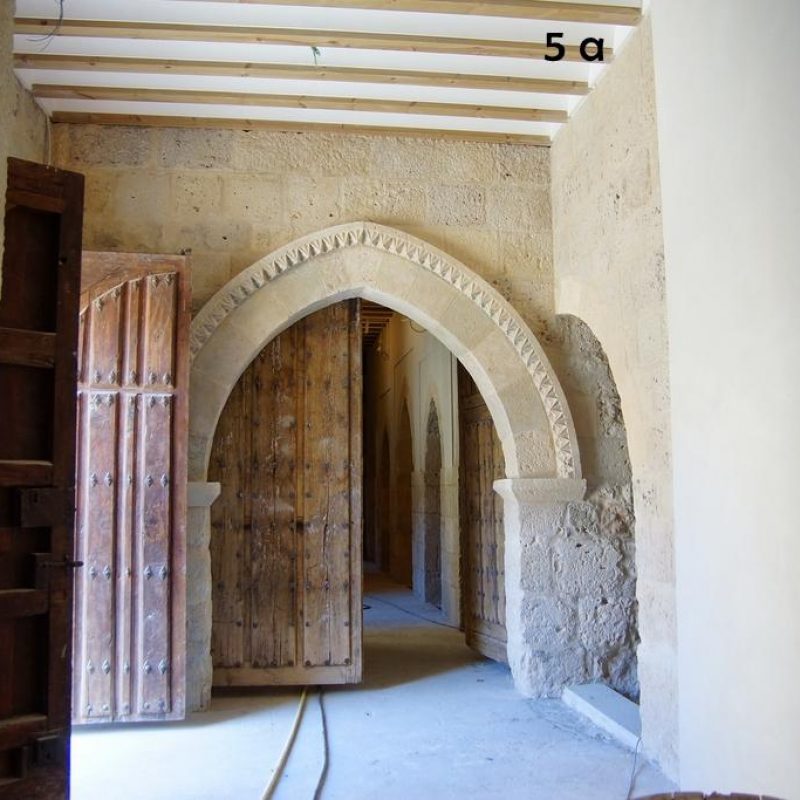 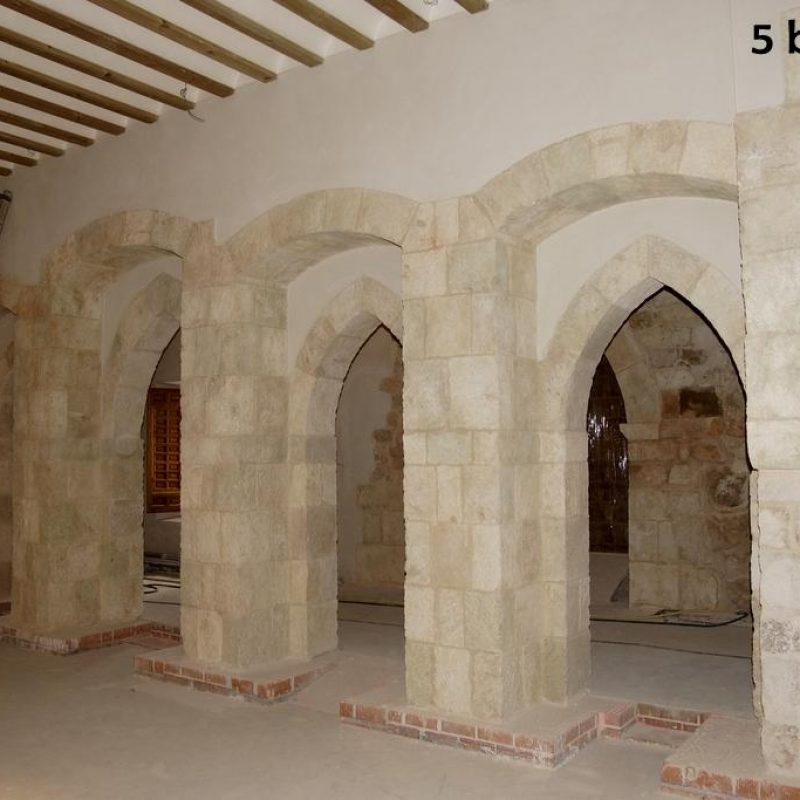 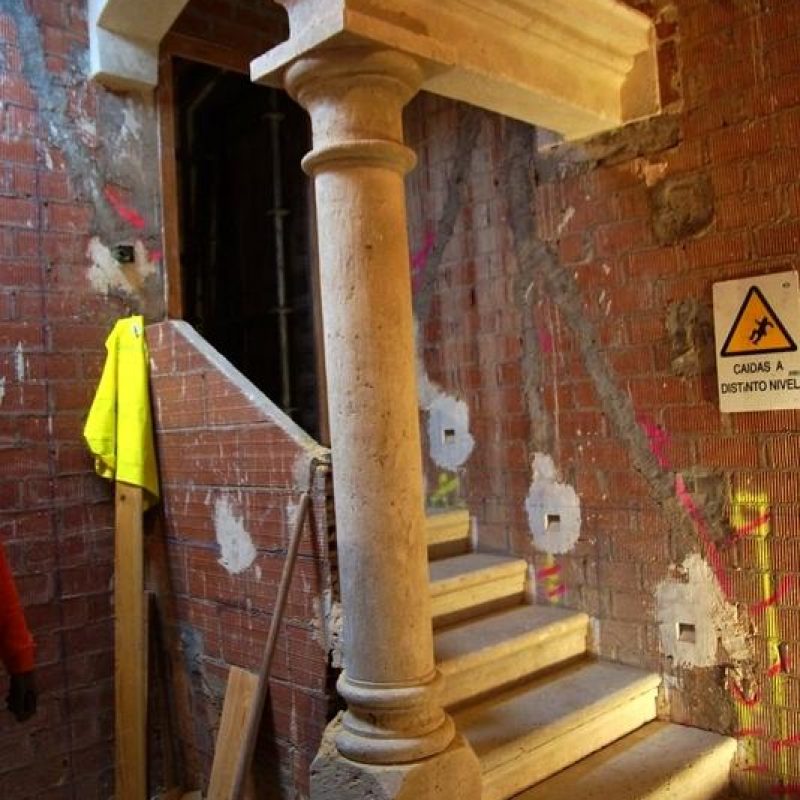 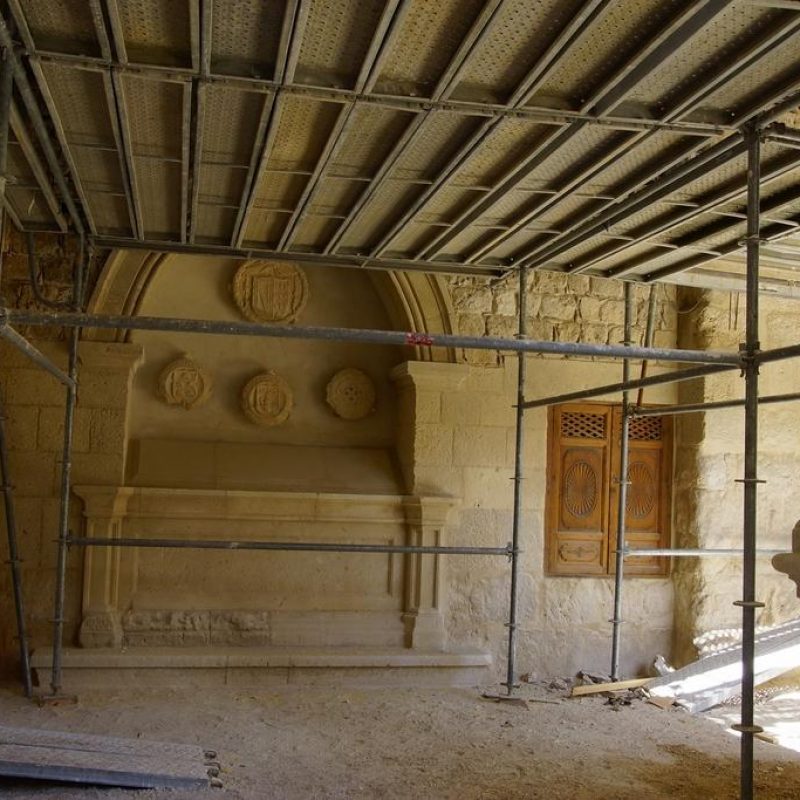